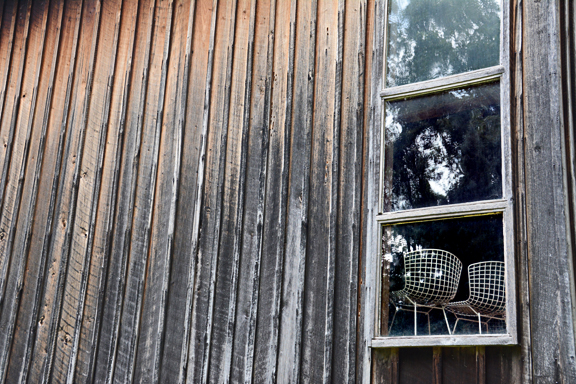 Background / Born in Italy in 1915, a teenage Harry Bertoia first traveled to Canada but spent his high school years in Detroit, living with his brother Oreste, an employee at General Motors. There Bertoia attended the Cass Technical High School and the Art School of the Detroit Society of Arts and Crafts before earning a scholarship to nearby Cranbrook Academy of Art. In 1937 Cranbrook was an institution that allowed students to pursue multiple disciplines—a perfect fit for the multi-talented and inquisitive young artist. He initially worked in the metal department creating jewelry of such high caliber that his work was included in exhibitions at the Nierendorf Gallery in New York City alongside well-known artists such as Alexander Calder.

Among Bertoia’s associates in the art school community were Charles and Ray Eames (for whom he created wedding rings), Florence Schust (later Knoll) and Eero Saarinen. All of those relationships would generate professional opportunities for Bertoia after graduation—however, the most important personal liaison was with Brigitta Valentiner, a Cranbrook textile artist, daughter of the director of the Detroit Institute of Art and his future wife.

At the invitation of the Eames Studio in California, Bertoia moved west in 1943 to help his former classmates investigate the commercial potential of molded wood furniture. Although history books would later credit Bertoia for his contributions in the studio, at that time the lack of recognition lead him to find work elsewhere.

After seven years on the west coast, a visit followed by an invitation from Hans and Florence Knoll enticed Bertoia to move his wife and children east to Pennsylvania. The Knoll furniture company sponsored the artist for two years while he freely experimented in his own studio. The atmosphere was much like Cranbrook; working without formal deadlines and taking time to develop the potentials of material and form.

This commercial and artistic partnership gave birth to what would become a classic in the Knoll collection. Bertoia’s sculptural furniture, comprised of criss-crossed steel rods formed in specially created jigs, was named the Diamond Series. First released in 1952, the design expressed much of the spirit of the Mid-Century Modern: a single unbroken main component and a clean aerodynamic shape. The lightness and space captured between the metal rods was a fresh and whimsical take on the “vessel and valley” chair form that Bertoia had developed with Charles Eames.

Each of the Diamond seating series, although manufactured from essentially industrial materials, was a comfortable fit for the human body. Most significantly, the success of Bertoia’s design enabled him to purchase a studio in the small town of Bally, a home for his family in nearby Barto, and the financial freedom to work independently for the remainder of his career.

Twenty years after the release of the Diamond Series I was a sophomore in college and tentatively declaring sculpture as my major of choice. Because I was completely baffled about the future implications of such a profession, my professor James J. Kelly (The Sculptural Idea) suggested I visit a local sculptor. I followed Kelly’s advice and arranged to visit the Bertoia Studios, naively unaware of the artist’s history or importance in the international art world.

My old jeep carried me along the rural roads of Berks County to the tiny burg of Bally, Pennsylvania. Bertoia greeted me outside his large studio and invited me inside to observe his work in fabrication. There I found a few young men wrestling with a large suspended piece of metal, attempting to correctly position it onto a sculpture on the giant platform below. (Most likely it was Bertoia’s son, Val, and another studio worker.) A number of Bertoia’s metal rod sculptures-in-progress were scattered around the space. The long vertical rod clusters, finished in a brownish-red patina, were a familiar site. We had one in the lobby of the art department at school, and we occasionally dared each other to brush up against it to make the bell-like sounds flow out.

Bertoia asked me about my future. I am sure I had a very weak response, clueless as I was of the world beyond my college environment. Perhaps it was my lack of direction that motivated Bertoia to make two suggestions: 1. Go to Italy and study art and sculpture and 2. Attend Cranbrook Academy of Art in Michigan (his alma mater) after graduation. Fortunately, as things turned out, I was later able to follow both pieces of advice. 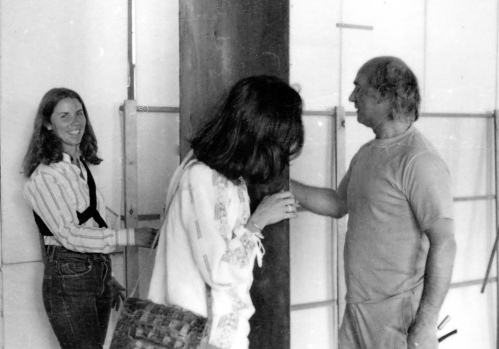 Forty years after meeting Harry Bertoia I learned that an exhibition dedicated to his work would open in July at the James A Michener Museum in Doylestown, Pennsylvania, a few miles from my home. Discovering that the Bertoia studio was still active, I contacted Val Bertoia to arrange a visit.

We traveled about an hour to the address Val had provided and waited to meet up with a group tour in progress (private tours can be arranged).  Apart from the Bertoia sculptures at that location I realized that nothing looked familiar. My memory told me that there was a large gravel courtyard yet today there was only a grass-covered lawn. While recalling a number of large industrial buildings, instead we found a home and a stone barn. It was strangely disorienting but Val was a welcoming soul and I shrugged the feeling away, chalking it up to my age.

We were invited into the stone barn where we found perhaps 50 or more of Bertoia’s Sonambient sculptures— kinetic works that produce sounds when activated.  The forms were mostly clusters of vertical metal rods of copper and bronze welded to bases. Other pieces included pairs of short rods suspended from the ceiling and immense round and rectangular gongs. Bertoia did not create his sculptures with a specific sound in mind but rather delighted in the surprise tones of each piece. Val treated us a live performance spontaneously named “Summer Heat on a Full Moon with Harry Sounds.” (It WAS rather warm in the unventilated barn at noon in late July.)

Four large microphones suspended overhead remained from when Bertoia recorded 360 individual magnetic tape recordings of his Sonambient music. Sounds resonated across the space as Val plucked, stroked, squeezed or rubbed the sculptures: other worldly, ethereal, with hints of nature, rain, thunder, wind-in-trees, rushing water after a storm. (Watching the following Youtube video helps you get the idea .)

Afterwards we took a short walk in the nearby woods. (Poison ivy alert—wear shoes and socks.) The grounds were full of works by Bertoia as well as those of Val, an artist in his own right. At walk’s end we passed a massive round gong, reportedly weighing a ton, that serves as the reverent place keeper over the graves of Bertoia and his wife.

After the home tour we had a fast glimpse inside the studio in Bally. There we saw the diamond chair prototypes and but again, I felt no tinge of recollection of the space. Another disappointment. 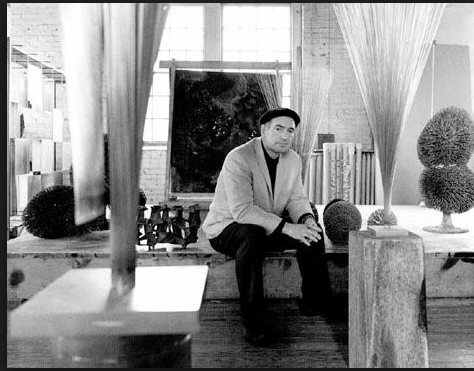 Fortunately all became clearer the next day when I came across a photo on the Knoll web site. It showed Bertoia sitting on the platform that I remembered so clearly. A quick check with Val confirmed that it was the same studio I had visited the day before. “The asbestos platform was initially used for welding up large sculptures. Here’s the story that Jim Flanagan told me much later. Harry wanted the whole platform (which may have been nailed to the floor) moved further away from the windows. When he asked Jim and Ed Flanaganto move it by hand with ropes, they could not do it with all their strength. Harry yelled for them to move aside, and he moved the whole platform by himself. I always believed he was superman, and he even told me one time, when I was a boy asking what is under that trapdoor at the entrance ramp; ‘Superman lives there.’ Well, certainly, Superman worked there.”

Bertoia at the Michener Museum

The exhibit at the Michener Museum fills two small rooms with monoprints, sculpture and jewelry. The Diamond chair, along with the form used for its fabrication, and a few variations from the diamond series are clustered together on one platform.

The monoprints, mostly ink on rice paper, were often Bertoia’s plans for future sculptures but the works stood up as art prints on their own. The subtlety of repetitive fine lines, the restrained black and white tonal range and the compositional strength is impressive.

It is entirely appropriate that the exhibit space is adjacent to the museum’s George Nakashima room. Val spoke of the many visits the Bertoias made to the Nakashima home and studio near New Hope, Pennsylvania and the warm friendships between the families. There was a relationship between the sculpture and the furniture too—Nakashima wood pieces made the perfect sounding board for Bertoia’s Sonambient sculpture.

The sad bit is that you cannot touch any of the sculptures. The room is silent although one pair of headphones allows the visitor to hear Bertoia’s Sonambient recordings—it is not the same as hearing and feeling the sounds in the flesh. What would happen if the museum allowed guests to play with the sculpture? It would be mesmerizing for the visitor but disruptive to the rest of the museum I suppose. I confess that I could not resist playing my own concert while I waited for Val to arrive at the homestead.

Thanks to Ron De Long and Tana Reiff for helping me recall some names and details from 1971.