It might be assumed that a sunny Greek island would be an unlikely location for a museum of typography, however there is a just such a place on Crete. Opened to the public in 2005, the museum showcases the private collection of Yannis and Eleni Garedakis, publishers of the Haniotika nea (News of Chania) newspaper. Their large and handsome museum is located on the outskirts of Chania, in an industrial building that formerly housed the newspaper’s printing presses.

The Greek word for typography, Τυπογραφία, translates to both printing and typography, therefore the enterprise is dedicated to both. The museum begins with rooms full of hand and foot operated printing presses that span the era from Gutenberg until the 20th century. However, most of the presses are not from Crete, but rather from Europe, and many from a museum in Leiden (Netherlands) that closed due to lack of funds. We asked our guide, the museum director Elia Koumi, “Where are the old presses from Crete?” It seems most were discarded when the computer age took hold. Prior to that many were smashed as the Cretans had a habit of printing incendiary revolutionary materials which greatly displeased whatever conquering power happened to be in charge of the island at any moment. (And due to its central location within relatively easy reach from various countries there have been a series of foreign occupiers until Crete unified with Greece in 1913.)

The Venetian Type Connection
One of Crete’s ruling entities was Venice (1204-1669) during a period that coincided with the blossoming of Venetian printing and type design. A healthy number of Cretan scholars traveled to Venice and played a major part in the development of Greek typefaces for printing.

Printing helped revive Greek as a viable language. Latin had become the predominate language and, after the fall of Constantinople in 1453, there were only a few native speakers and a small community of scholars who read Greek. So when the ability to print in Greek was made possible in the late in 1460s, the Venetian printer Aldus Manutius (who had studied both Latin and Greek in his youth), published the first grammars and dictionaries with Greek–Latin translation to nurture Greek literacy. Aldus was anxious to apply the new technology of printing to ancient literature for the “preservation and diffusion” of Greek texts, and his grammars helped to build a future buying public.

Greek is a difficult language to translate from written shape to metal form: in fact, Greek was so difficult to print that there were as many written manuscripts as there were printed Greek texts during the 15th century. Not only did it vary from person to person but “Greek script with its fluid interwoven patterns was a formidable problem to the new technology of punch and matrix, … “Whether written formally or informally, each letter ran into the next, forms overlapping and coalescing horizontally and even vertically. Abbreviations, contractions, ligatures, abounded: one word would involve a pen stroke traveling over a notational space of five or six letters, perhaps incorporating some feature in the line above, a word might even split apart and be arranged on two stories within a line.” (Baker) There was the issue of “accents and breathings”, complex marks the reader interpreted for pronunciation purposes.

Working with punch cutter Francisco Griffo, Aldus created four different Greek fonts, the first emulating the handwriting of calligrapher Immanuel Rhusotas. These projects demanded a large number of letters, accents, punctuation and ligatures. “It was a costly process and Aldus made sure that his initial publication, Lascaris’ Erotemata, was accompanied by an official request to the Signoria for a patent for his new Greek type.” (Baker) Aldus’s eventual publication of 30 Greek titles was instrumental in preserving the content of important fragile manuscripts including his complete works of Aristotle between 1495-1498.

Over the next few centuries other Greek types would follow, i.e. Claude Garamond’s famous Grecs du roi (1541)—a Greek model that held for over 300 years. Near the end of the 17th century Nicolas Kis and printer Heinrich Wetstein “freed Greek from ligatures and abbreviation” into a more simplified script. Another later approach, during the Industrial Revolution, was to attach accents to each possible letter combination, necessitating a 750-piece font.

Teaching Museum
The museum is not just a repository for antique presses and type. Each year over 5,000 school students visit from all over Crete. An amphitheater with 80-tiered stadium seats and audio visual equipment allows for all sorts of presentations, book readings, video screenings and lectures. There is a library and museum shop that complement the 1200 square meters of space. By 2016 the museum had gained international recognition, it was nominated for the European Museum of the Year Award (EMYA).

There are educational programs for all ages that teach printing history and encourage the study of journalism. Visiting students can learn about their homeland’s occupation by the Ottomans (1669–1898) through printing ephemera. The first newspaper in Crete was printed in 1831 on presses likely brought by the Ottomans. The Cretans, a fiercely independent population, staged a series of heroic uprisings. The local Cretan printing presses were used less for book printing and more for revolutionary material hence, their destruction by the Ottomans.

An Artistic Display of Writing Development
In April of 2012 the museum collection was expanded to include an innovative exhibition on the history of writing. Each development is ingeniously interpreted through the artistic vision of Antonis Papantonopoulos (a printer and designer who lives in Patra, Greece). 40 separate panels feature assemblages of artifacts with explanatory copy to illustrate the practice of writing from cave painting to photo type composition.

Poster Competitions
That presentation space doubles as the display area for the finalists and winners of the museum’s annual poster competition. The theme of the poster competition, type and printing history, came from a recognition that “Most graphic designers know what happened last year, or in the last 15 years, but few look back to see how and why the field started.” The poster contest “creates the motive to look back and connect the history of typography with today.” There has been such an overwhelming international response to the contest (600 entries from 51 countries) that the museum is considering a bi-annual event; alternating that massive jurying task with an invitational exhibition. 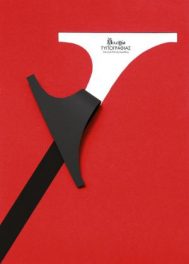 We left after about two hours with some fun souvenirs of our visit, including a charming card that we had printed on one of the antique presses, the words “and they printed happily ever after” in Greek. 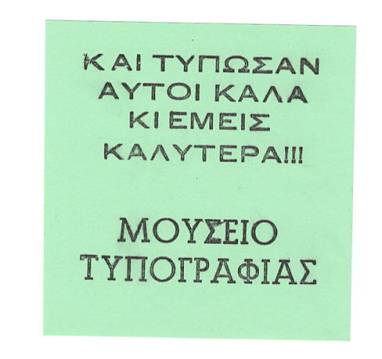 Bibliography and Further Reading
Barker, Nicolas. Aldus Manutius and the Development of Greek Script & Type in the Fifteenth Century. With Orig. Leaves from the 1. Aldine Editions of Aristotle, 1497; Crastonus’ Dictionarium Graecum, 1497; Euripides, 1503; and the Septuagint, 1518. Chiswick Book Shop, London, 1985.

Juna José Marcos, History of Greek Typography from the invention of printing to the Digital Age. 2019.

Rosenblum, Joseph. A Bibliographic History of the Book: An Annotated Guide to the Literature, Rowen and Littlefield, Maryland. 1995.

3 thoughts on “The Printing Museum of Crete: “And they printed happily ever after”  ”